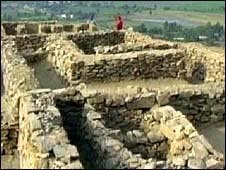 The ruins of an entire city have been discovered in northern Peru, researchers say.  Archaeologists say the find could provide the missing link between the ancient cultures of the Wari people and the earlier Moche civilisation.

The site, near the Pacific coastal city of Chiclayo, probably dates to the Wari culture which ruled the Andes of modern Peru between the 7th and 12th Century.  The once buried city showed evidence of human sacrifice. The remains of the victims were thrown over the nearby cliff, Cesar Soriano, the chief archaeologist on the project, told the Andina news agency.

Ceramics, clothing, and the well-preserved remains of a young woman were also discovered, he said. “It provides the missing link because it explains how the Wari people allowed for the continuation of culture after the Moche [died out about 600 AD],” Cesar Soriano was quoted by Reuters as saying. Mr Soriano said the find provides the first evidence of Wari culture, which was based in the south of the country, at the northern site.