post-title Andean Exped – knowing when to turn back

Andean Exped – knowing when to turn back

Thanks from our sterling leader Matty for this gripping account! 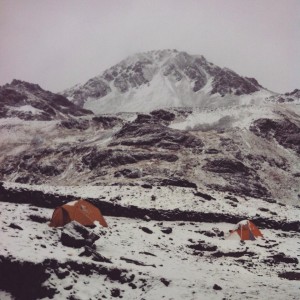 What is it that draws us to the mountains? When you think about the cost, physically, mentally and financially, and compare it to the fleeting moments gained at a mountain summit it really does make no sense.  However, the impulse to propel oneself to the very the top of a peak remains a strong addiction in many of us.

Quest teams regularly take to the mountains in both South America and Africa. To organise an expedition takes time. Preparation physically, checking and cleaning of group items (such as tents, stoves and medical kits), planning your routes and the ever importantt evacuation routes as well as packing your personal trekking bag. Not forgetting the most important trek preparation activity- the visit to the local market to buy the food!

However, some things are quite simply out of our control. How can we predict the unpredictable? The Pacha Mama is of crucial importance for many South American local climbers. She is mother earth and grants those lucky few access to the high Andean peaks. Without respect for nature and permission from the Pacha Mama, many locals believe there is little chance of leaving the mountains unscathed.

The Quest Andean Expedition Team 2015, in their attempt to climb the Bolivian peak Pequeno Alpamayo (5600m), seemingly upset the Pacha Mama. At midnight we woke up. The setting of an alarm to wake up at midnight is arguably the most demoralising thing possible. We ran to the cover of our cook tent and put on our ice-climbing gear, bar crampons (they are only needed for the first steps on the glacier itself). All ready to go, I looked outside and my heart sank: snow is falling, high speed winds circle us, no stars are visible and, most damningly, our head climbing guide Lucio slowly shakes his head. 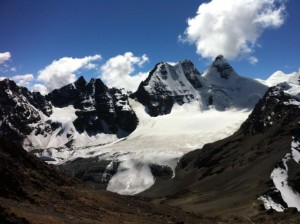 Climbing mountains gives me a buzz that is hard to explain. So the thought of making a failed summit attempt makes me hurt in ways that are equally hard to explain. So in my desperate state, I begged the Pacha Mama to relent the bad weather conditions.

Surprisingly, the wind died, the snow ceased and our guides smile returned. Off we went towards the groaning glacier. Our excited, quiet chatter continued for the first 200m, then the bitter cold and harsh conditions reminded us for the need to focus on the task. Before long, the seemingly endless darkness of the early hours of the morning were met, abruptly, by the relentless mass of white glacier in front of us. This groaning, straining wall of ice making its unstoppable journey down the face of the mountain was our next challenge. Crampons on, time to ascend. 3.30am.

The wind returned. Who were we to think that the Pacha Mama could be convinced to let us pass her quite so easily?

Still at the foot of the glacier, Lucio asked us to turn our lights off. Within 20 seconds our night vision kicked in and soon became clear what we were doing- how dense were the clouds ahead? Could we see any stars? The answer, no.

Wait. Yes! One. Two, three, four. The clouds were scattering and the stars were coming out for all to see. We waited a further ten minutes before the call was made. Up we went!

Climbing at high altitude is very demanding. Yet the feeling and sound of the snow and ice crunching under your feet, the lulls of silence in between the howls of wind and the acknowledgment of different muscles working that you didn’t even have, makes the thinner air all the more palpable.

Our luck ended abruptly. The wind stopped and a snow storm descended. Game over. To admit defeat is hard. It hurts. In fact you feel like having a tantrum much a like a toddler having his favourite toy taken away. However to take risks on the mountain is simply not an option.

Yet it was not meant to be. Turning back is nothing to be ashamed of, carrying on is simply negligent. Whether or not we had offended the Pacha Mama the views were incredible. I don’t know if I speak for the group, but this failed summit has only made me want to climb harder and higher!