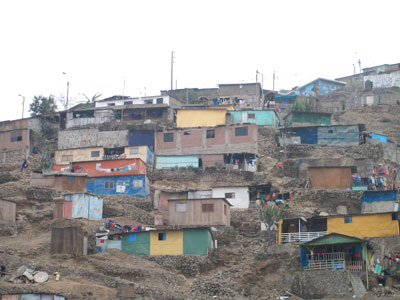 Once the excess baggage had been ditched we made our way to Villa Maria, where hammers, nails, saws, wood and a plan for a new house awaited us. Before lunch progress was quick and efficient, everyone worked their socks off, and we were rewarded with an excellent meal made by Lucho, just what was needed. The post prandial effort was a little more lethargic (with the commendable exception of Jess and Lizzie), with the girls joining in with street volleyball and the boys being given a schooling by local 13 year olds in football. After an afternoon of trying as many different ways of shortening the front door (apart from the obvious use of a hacksaw), all the volunteers were shattered after dinner, but wouldn’t be allowed to sleep for at least 45 more minutes whilst the local trio played an amusing game of lights on lights off.

Las Islas Ballestas and Huacachina:
Today was epic! After another early start we left the very fancy hotel but very rundown Pisco. We had a slightly cramped journey, cramming 9 people, 9 huge backpacks, 3 tents and some inevitable extras into 1 van. Luckily we quickly arrived at the port and embarked on our trip to the Islas Ballestas, the Poor Man’s Galapagos. The speed boat ride was fun and the wildlife was amazing. THere were pelicans and penguins and sea lions all perched precariously on the rocks. We were also graced with the presence of a family of dolphins on both ends of the journey which was stunning.

The 2nd part of the day we arrived into Huacachina at our hostel. THe scener here is mad, huge rollng sand dunes and completely sparse desert. We got to explore the surrounding dunes on our sand boarding trip. We piled into 2 sand buggies and proceeded up the dunes. The driving was like a rollercoaster ride without the track. The boarding was brilliant fun, sore bums and sand everywhere all round. 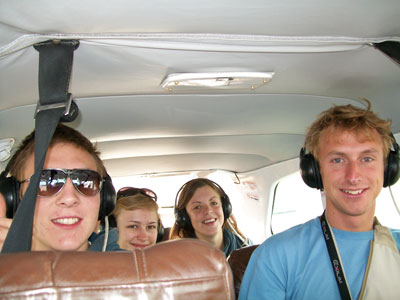 Nazca Lines and Puerto Inka:
Our flights over the Nazca lines were pretty cool, particularly the 6 legged bird head, but most people on our flight were more distracted by their air sickness! James was feeling particularly delicate. Nonetheless the flight was good fun and we got a few good pictures of the lines. After the flight it was back to the centre of Nazca to grab some lunch. The menu of the restaurant was quite amusing with the tempting option of ‘poor meat’ particularly standing out! The complimentary drink was also the source of quite a bit of amusement with James trying to pull the twigs out of his before he would drink it!

We then took an awesome privtae bus with loads of room to spread out. This took us to our campsite for the night – a beach! The tents were up in a jiffy and Lizzie and I started a superb fire, in no time it was on with the food BBQ stylee! The next morning we set off to explore some close by Inca ruins. We got to see communal burial pits and a fish processign plant basically, but the most memorable thing was James and Will loosing the american football down a storage pit. James refused to leave it there so Will reluctantly lowered himself in to get it, then James showed some impressive strength in lifting Will out again! After lunch we made our way to the main highway to wait for our bus to take us to Arequipa. While waiting we passed the time deciding on our menu for our imminent 1st trek in the Colca Canyon, the boys played catch with the rescued american football and the girls attempted to learn ballet from Jess. 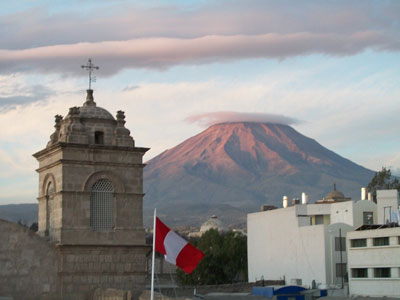 Arequipa and the Colca Canyon:
It was an early wake up and we still almost missed our bus to take us tot he start of the trek in the Colca Canyon! The bus journey was dull but entertaining moments included Steve’s translation of his book to his neighbour for 3 hours, llamas being put in the hold, and the toilet situation at the half way point. One word: ‘explosion’. The trek started with a weakened batallion with Lizzie, Emma and Emily down and out with illness. Trek was long and uneventfull with everyone suffering from dodgy stomachs. Day 2 presented us with a good 3 or 4 hour walk with a mixture of uphill and downhill sessions, a serious uphill slog midway through the morning was the toughest part although i’d definately say the long rest and powerade at the top was well deserved. After another hour of walking we touched down in the green haven of the Oasis. Stunning scenery here, very atmospheric and spiritual. We were expecting to find the other trio here, but found out that they were still feeling too ill to trek and were staying another night up in Cabanaconde. Most of the afternoon was spent rotating between the lounging at the pool and on the ‘sunbeds’.

Day 3 the weakened batallion woke up early to another breakfast of chocolate porridge. Then the dreaded 1130m climb back up the canyon commenced, with newly fashioned walking sticks, everyone went at their own pace. After 1/2 way it seemed that no-one was progressing, crossing locals who promised it would only take 20 mins more to reach the summit kept everyone going, these were however revealed as elaborate lies as we all found ourselves going a good 30 mins later. We then joined with the injured party who looked refreshed and well rested. After a well deserved bowl of soup and recovery in a comfortable sofa, it was once again time to hit the road, the 6 hour bus journey couldn’t have been more uncomfortable or have any more people on the bus (including a sheep).

On our return to Arequipa we dined at a great Mexican restaurant and then hit the town, lapping up the bargain cocktail buckets.

That’s all for now!