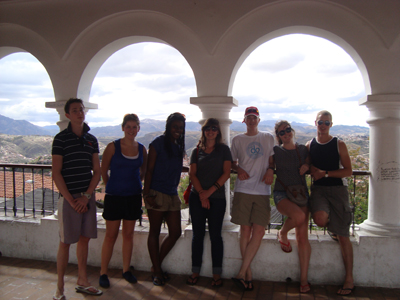 After a tiresome journey, involving Jess nearly being left behind at
Heathrow due to a ticketing mix up, we arrived in La Paz where we met
up with Gen, who had flown from Australia, and Emily, our team leader.

To everyone´s dismay, we learnt that a 12 hour bus ride to Sucre was
on the cards for that evening. Rain greeted us as we arrived at 7.30am,
and we proceeded to play cards for 4 hours at the hostel whilst waiting
for our rooms to become ready. That afternoon, we all sat a 4 page
Spanish written exam and an oral exam to determine which set we would
be placed into. As James, Jess, Matt, Max and Gen had no Spanish
skills, this proved to be quite a challenge, with most resorting to a
mix of French and English. Tiahna and Ciara however blitzed it and were
subsequently placed in the top classes.

To celebrate our arrival, we went out for dinner with the school staff and afterwards, out for our first night of shenanigans.

The following morning, we polished our shoes, brushed our hair and
walked to school to begin Spanish classes. As expected, the beginner´s
class was hilarious, with a lot of ´Spenglish´ being spoken despite our
teacher Patricia´s valiant efforts to make us only speak in Spanish.

Dinner
was kindly catered for by the ever hospitable hostel owners. We then
made the long walk up to the highest part of town to take part in the
up until that point,mysterious sport of ´Wally´. Headband and Quest
tshirt clad, our sporting prowess shone through as we quickly picked up
the basics of the game – a cross between volleyball and squash! Quite
tired and with throbbing wrists, we narrowly lost tothe highly
experienced staff from the school. A celebratory night out again proved
popular, with numerous moments of pure hilarity, namely provided by
Matt´s great stories and Ciara and Emily´s games. 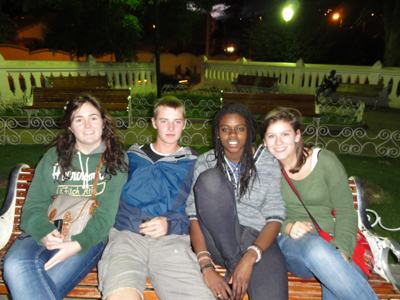 Slightly worse for wear, classes were on again from 8.15am, followed
by a night of a table football competition, complete with sangria and
burgers. The dream team of Ciara and Gen (aka ´team huge´) progressed
to the semi final, only losing out to the eventual winners.

The entire group had a rather messy night out; tequila and a Harry
Potter themed drinking game being the main culprits! All was good
however as we had a sleep in until 11am. Following a nutritious
breakfast organised by the week´s food committee James and Ciara,
Saturday was a rather lazy day with beautiful weather – the highlights
being a walk up to the ´mirador´ viewpoint to take in the panoramic
views of the beautiful colonial style buildings of Sucre. After an
afternoon siesta, we wandered through town to the park for the ´dancing
water´ fountain and enjoyed a spectacular light and music show.

Excitement
was rife on sunday morning as we awoke to Emily´s birthday! Despite the
rain, the weekend of relaxation and fun continued as we caught a bus to
the town of Tarabuco to visit the markets. Everyone came away with an
alpaca wool jumper!

After an afternoon nap,we surprised Emily witha chocolate cake (to
which, rather embarrassingly, she had a small allergic reaction) anda
present of a woolen finger puppet from each person!

Tonight
we´re going out for Emily´s birthday, the final event of a
spectactularly enjoyable first week full of entertainment and bonding!

Why not follow in their footsteps as part of Bolivia Team 2 departing on 27th March 2011?