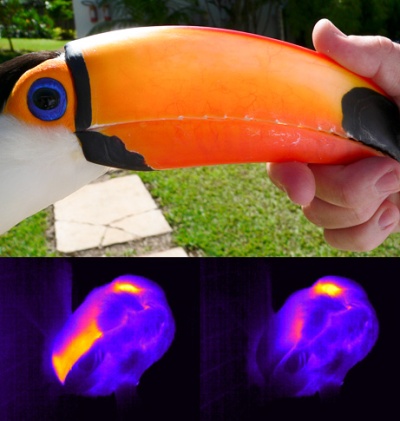 To Charles Darwin it was emblematic of sexual desirability. To French naturalists it was “grossly monstrous”. But even to the uneducated eye, it was conspicuous as an alarmingly oversized appendage.

The toucan’s bill is one of the most bizarre products of evolution, but in the past 200 years scientists have failed to agree why it has grown so huge. Some argue it helps the birds collect hard-to-reach fruit, while others say it is a warning to rivals, or helps them raid other birds’ nests for food.

Glenn Tattersall at Brock University in Canada and a team of colleagues wondered if perhaps the beak served an altogether different purpose. They claim that the birds don’t primarily use the huge appendage for sexual display, or as a tool for getting at hard-to-reach fruit, or to scare other birds – but as a giant radiator.

In a report in the journal science, they claim the appendage doubles as a giant radiator that keeps the birds cool in the heat of the tropics. Heat-sensitive cameras have bene used to film toco toucans, which have the largest bills of all the toucans. It revealed that the birds use their bills to control their body temperature by adjusting blood flow into the appendage. By opening or closing blood vessels in the beak, the birds can lose as little as 5% or as much as 100% of their body heat through their bill.

The study puts toucans’ beaks on a footing with elephants’ and rabbits’ ears as nature’s solution to life in a hot climate.

Thermal images of the birds show that at sunset, as they were preparing for sleep, their bills cooled by around 10C in a matter of minutes. The large, exposed beak makes up around 40% of their overall surface area, so it rapidly radiates body heat and helps them to fall asleep. Immediately before nodding off, the birds cover their bills with their wings.

The Toco toucan is at home in South America’s tropical forests but recognized everywhere!

Find out more about our South American projects in the rainforest!