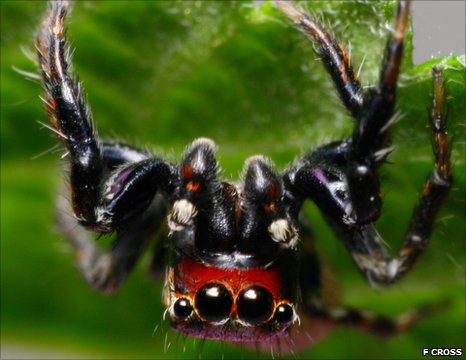 Reported by the BBC this week, a spider that preys on the malaria-carrying mosquito is attracted to the
smell of sweaty socks.  According to a
study done by scientists at the University of Canterbury and the International Centre of
Insect Physiology and Ecology (ICIPE) in Kenya, the jumping spider seems to
have adapted to the behaviour of its prey, anopheles gambiae, and is attracted to smelly human odours.

The only known predator that
preys specifically on blood-carrying mosquitoes, the evarcha culicivora spider was tested for its attraction to air
pumped from a chamber containing a clean sock versus a chamber with a worn sock,
and apparently, results were conclusive.
According to one of the scientists, “When they smell blood,
they can launch into feeding frenzies where they kill up to 20 mosquitoes in
rapid succession, and not necessarily to eat all of them”.  The scientists are now looking into ways for
people to attract the spiders into their homes without also inviting the mozzies to stay.

The number of sweaty socks that abound
on any Quest project after a long hard day’s work, these (admittedly rather terrifying-looking) spiders can’t fail
to be a good thing….

Read the article on the BBC here.