post-title Gurkha’s face yet another battle 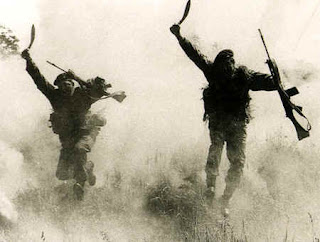 Gyanendra Rai gazes at the smoke as it curls upwards from the funeral pyre and thins out over the rooftops of Pashuputi Nath, the world’s most sacred Hindu temple.

Rai thought of this place when artillery shrapnel chewed into the side of his back and right shoulder while he was fighting for the British army in the Falkland Islands: he imagined his body lying there on the cremation ghat.
On June 11 1982, Lance Corporal Rai – a drummer with the 1st Battalion, 7th Gurkha Rifles – almost lost his life during the final assault on Port Stanley. Seriously injured, he received five pints of blood donated by British soldiers, and the skin that was grafted upon the cavernous hole in his back was taken from one of his fallen comrades.
Read More at:
http://www.guardian.co.uk/uk/2008/sep/12/military.defence