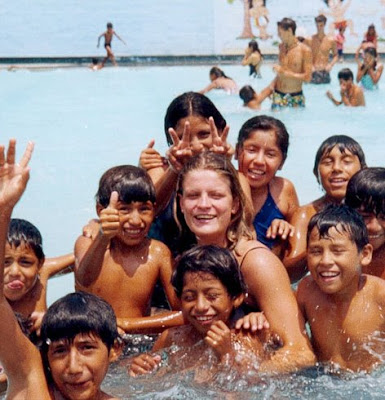 During her gap year, Katie spent a month taking part in The Villa Maria Project, working in one of the poorest areas of Latin America, in Peru’s capital of Lima. In her memory, we will be raising money to launch an initiative to provide improved housing to the families of the the most disadvantaged children in Villa Maria.

With over 600,000 inhabitants, Villa Maria is one of the largest shanty towns in the world and Katie taught sport, art, music and theater to some of the children living there. Katie particularly enjoyed this part of her trip and she came away having touched the lives of many of the children who she met during her time there.
The Villa Maria Project
Quest Overseas has been working with the communities of Villa Maria for over ten years now. It has focused its energies on improving the general living conditions for the children, providing summer camps, health programmes, a pre school and primary school and year round activities for all ages. It has already shown dramatic improvements, hugely reducing crime and gang warfare in the area. Space in the valley of Villa Maria is becoming increasingly limited and families are being forced to cut precarious platforms into the hillsides to erect there homes, which all lack basic facilities – water, electricity and sewage. These oppressive conditions often lead to the break up of families, leaving single parents to struggle to work and care for their children. Education, health and general well being are extremely difficult to maintain, making it hard to give the next generation the opportunity to better their situation
Katie’s initiative
In her memory, we will be raising money to offer improved housing to the families of the most disadvantaged children in Villa Maria, those from broken homes, generally with single mothers. The constructions are basic , single storey wooden constructions which can be put together in a matter of days. They can be single rooms or many rooms depending on the size of the family and the funds available. The great advantage is that they cost relatively little to buy and make; a simple home for a family of 4, with electricity, water and sewage costs around £500 when available. These solid constructions will provide the warmth and hygiene which families have previously been missing. We feel that this is a very fitting project to support in Katie’s name as she felt very passionate about both the people and surroundings of Villa Maria