post-title Lost in the Jungle – Bolivia Team Update from Matt

Since we were last in touch, we have now visited three of the 5 parks that Inti Wara Yassi are in charge of. We have worked with Pumas, worked with monkeys, carried rocks and sand and had a couple of adventures along the way. 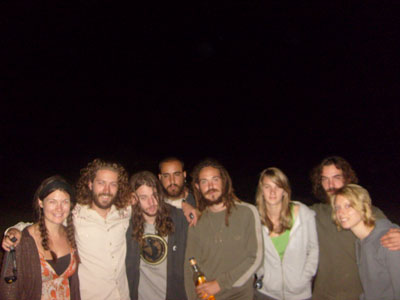 Our first stop was the new park Jacj Cuisi near Rurrenabaque. Jacj Cuisi means ‘Land of Dreams’ in the local dialect and it is certainly aptly named. The park was awesome, seeing the jungle and bathing in a natural stream were great experiences and we quickly got used to being dirty (although not as dirty as Keith and some of the long term volunteers there – they had made being dirty an art form!). The park itself is very new and is yet to get electricity, showers or even a proper kitchen (the long term volunteers cook in a small shack using a wood fire), but this is the charm of the place. It is so perfect, after work and our bath in the stream we had time to sit, relax and watch the parrots and toucans flying overhead, we also saw and heard different groups of monkeys in the jungle. We were also pleasantly surprised by the general lack of mosquitoes, although this would not last throughout our time. The aim of our time whilst in Jacj Cuisi was to install a double door system onto Lishou’s cage (one of the two puma’s that they currently take care of. This entailed lots of back breaking carrying, digging and even mixing cement.

We managed to complete our task within time and then helped with the clearing of a plot of land where they are now building a new kitchen and food storage.

Our final night we had a big bonfire to burn some of the stuff we had cleared for the area.

One week down and it was time to move on, next destination Ambue Ari. We left the park in the back of a truck, with the wind whistling through our hair and the sun on our faces, we would definitely miss Jacj Cuisi, especially with what came next.

To get to Ambue Ari we had to take a bus from Rurrenabaque to Trinidad. Now we should have known that this journey was not going to run well when our midnight departure had still not turned up at 4 am! The bus arrived at 5 am (yes, 5 hours late!) with no seats, despite Matt having bought the tickets a week beforehand. Matt managed to get us onto the bus despite the driver not wanting any more passengers (maybe we should have listened to him!) and we attempted to try and sleep in the aisle amongst screaming kids, luggage everywhere and a decidedly suspect odour! 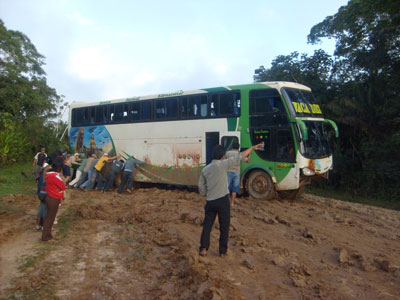 The journey got really interesting after a few hours, when the road turned into a huge quagmire, we were getting stuck every 100 metres and at times the bus went fully perpendicular across the road! Progress was slow, but we tried to see the funny side. However at 7pm (7 hours after we should have arrived in Trinidad) when we got to San Ignacio, the driver declared that that was as far as we were going to be going for the day. All of the Bolivians who had seats slept on the bus, but as we didn’t have seats we had nowhere to sleep, we found a very rarely used hostal and had some 5* fried chicken.

Our journey resumed at 7am the following morning with a renewed camerardary, however, it became clear very quickly that the second day of our journey was going to be much like our first day! Drive for 5 minutes; get stuck in mud; everybody get off; men dig and push, women watch and laugh; get the bus straight again; everybody back on the bus; drive for 5 minutes; get stuck in mud…..

Coral was starting to get anxious while Alice was past caring. Matt simply hung his head out the window and laughed sporadically – there was little else to do.

Another stop came our way and we started to get frustrated, but we had stopped outside a farm, the assumption was that they were stopping to get something to help us, maybe some wooden slabs, chains for the wheels or something along those lines, but when Matt asked what they were stopping for he got a one word response that he wasn’t expecting – ‘Toronja’ (Grapefruit). The guys from the bus hadn’t been calling out to find someone in the farm; they had been calling out to make sure that there WASN’T anybody there. Once they were happy that nobody was home they started grabbing branches and shaking the grapefruit to the ground, they came back to the bus with well over a 100 juicy grapefruit which were all shared out amongst the bus and Matt’s Leatherman got very well used.

The grapefruits seemed to make the road a lot better and the remainder of the journey passed quickly and we were almost sad to arrive in Trinidad at 2pm after 38 hours of travelling!

From Trinidad, we were keen to get to Ambue Ari, so Matt splashed out on a fast car that took us to the park as fast as the wind, arriving in time for dinner and an opportunity to meet a new set of smelly friends.

Ambue Ari is quite similar to Jacj Cuisi in that there is no electricity and it is quite tough jungle living, but it is a lot further down the line than Jacj Cuisi is. When we arrived there were 45 volunteers working with 25 cats including Ocelot’s, Pumas and the largest feline in South America, the Jaguar; a wealth of birds, a few monkeys and a selection of random other species including pigs, deer and a tapir! We all helped with Puma’s, Alice with ‘Chico’ a baby puma; Coral with the ‘sisters’, ‘Inti, Wara and Yassi’ three very affectionate puma’s who live, walk and play together; Matt helped where he was told to!

The mozzies got worse in Ambue Ari and we all had to control ourselves to stop itching ourselves red raw! But that aside we had a great time, good food, swimming and running with puma’s and meeting lots of international volunteers made for a great two weeks.

Which brings us almost up to date, we are now in Parque Machia, the original park of Inti Wara Yassi. We came via a very brief 10 hour stop in Santa Cruz where we had pizza, showered and slept before arriving in Machia just in time for Matt’s birthday, where disappointingly Matt didn’t get egged (a tradition that was respected greatly in Ambue Ari, by which you celebrate somebody’s birthday by cracking an egg on their head and then throwing flour on them! Matt felt that he had missed out not getting floured!

We are now both working with Capuchin monkeys which we will be doing for another week whilst we wait for the annual Fish festival, Alice’s birthday and then our final trip to Lake Titicaca to visit the Andean park.