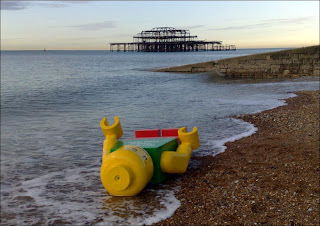 Mystery surrounds the appearance of a giant Lego man on the beach here in Brighton.
The 6ft-tall (1.8m) red, green and yellow figure has the slogan “No Real Than You Are” painted on the front and some words written in Dutch.
A Brighton resident said he had spotted the figure in the water while walking to work this week.  It is not known if the figure washed ashore or was carried to the seafront. A Lego man with the same slogan appeared on a Dutch beach last year.  Spooky!  Watch out for giant legomen at beaches near you!