post-title Norwich have the X Factor too! 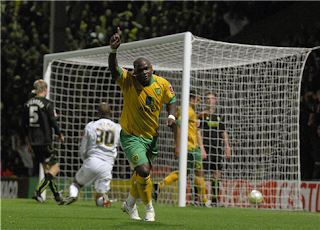 There may have been goals galore in the Champions League, but there were a fair few in the Championship too, especially at Carrow Road! Leroy Lita hit a hat-trick as Norwich notched a win which knocked Wolves off the top of the Championship table!
For a side that had scored just one goal from open play in their previous six games and only eight in the first 11 games of the season, a five-goal tally was simply staggering.
Come on you Canaries! Promotion here we come!

After thought from Simon, “I agree Norwich are actually quite good!”