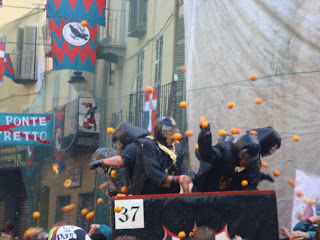 The little town of Ivrea in Northern Italy descended into Carnival madness with orange fights causing bruises and black eyes every year. This year Heather from the Quest4Change charity was there to get involved in a bit of a battle.

Ivrea is a small town which celebrates the chopping off of the head of an Evil Duke every year with a month of celebrations culminating in four days of orange fights, fireworks and festiveness a go go. People come away from the fighting with broken noses, black eyes and seriously smelling of oranges. It’s only for the hardcore, although the less hardcore can hide behind massive netting and watch the battles from safety whilst sporting a natty red hat. With barely another foreign tourist in sight, apart from some crazy Scott’s and Irish this is a truly unique festival not to be missed for those looking for something a little different.