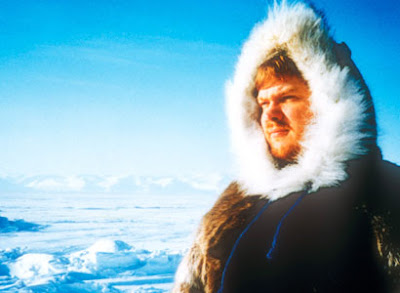 You’re lost in the middle of nowhere.
Dusk is present, soon to be greeted by the imminent blanket of darkness.
You are hungry and wet, you notice a figure walking towards you in shorts and penknife in hand.

Struck by fear you can’t move! That is until you notice it’s Ray Mears, warmth fills from within – you are saved. Undoubtedly a fire will soon be raging made from nothing but trapped wind and an eye lash, followed by a succulent meal of worms and leaves. The man is incredible, an office Hero. Bellow is an article from the Guardian

Autumn is Ray Mears’s favourite season “because the campfire seems important again”. Stags are rutting near his home in East Sussex and the low sun struggles to wipe away the heavy morning dew. Lying on the damp, leaf-covered ground recently, Mears came within touching distance of two curious deer. He must have kept very still. “Your body doesn’t have to be still,” he explains. “As long as you are spiritually still, then things happen. That inner current is most important of all. It draws things to you.” He quotes the Canadian conservationist Grey Owl – “Remember that we all belong to nature” – and then recalls what was once said about the man: “‘When the average person walks into the woods and they tread on a stick and it snaps, the animals unite against the intruder in silence, and part of that silence was Grey Owl.’ I’ve always tried to be a part of that silence.”

Britain’s favourite bushcraft expert detonated a minor explosion earlier this year when he dismissed his rival TV adventurer Bear Grylls as “a boy scout” and “a showman”. In a recent Guardian interview, Grylls graciously accepted that Mears was “much tougher” than he was. A plush restaurant in central London is probably not the ideal place for a survival guru to launch round two and Mears wants none of it. “It’s boring,” he says dismissively as he orders cream of watercress soup and tuna loin. He does not consider himself a TV personality and also rejects the survival expert tag. “I don’t want to be stereotyped with this word, ‘survivor’. I can’t stand that. It’s a small part of what I do,” he says. “I’m a simple woodsman.”

Mears is part of the way through filming a new BBC series in northern Canada and has just published a book of photographs culled from 300,000 images he has taken during 20 years of travelling the world. Between rather lovely portraits of native people from southern Ireland to Africa’s Skeleton Coast, he writes that he seeks out “quiet moments rather than loud”. From this year’s Ray Mears Goes Walkabout to earlier series of Ray Mears’ Bushcraft, his TV series are more sensitive and reflective than rival outdoor adventure shows. “Because I’m a woodsman, I live in the woods and I notice the subtle things that aren’t normally spotted,” he says. “I did have one producer who kept writing lines like, ‘If you don’t do this, you’ll die in minutes.’ It’s just not true so I won’t say it. I want to show things as they are. There’s an immature view of wilderness as being a threat to human beings, but for most of the people I work with it’s home.”

Mears grew up in Kenley, Surrey, where the suburbs of south London meet the North Downs. How did he develop his great love for woodland? “I didn’t develop it – it developed me. It found me.” Being an only child, he believes, “was an important part of shaping me”. There is still something stolid and short-trousered about Mears, even though he is 44. It is easy to imagine him stomping off on his own into the countryside as a boy. He would trace the source of a spring on his OS map or follow animal tracks. “Times alone are when you have a chance to listen to your own mind. That’s something we don’t allow ourselves today,” he says. “I was very lucky to grow up in that generation before mobile phones. It’s fascinating how thought processes today are constantly interrupted. Although we can communicate faster, we are able to think less quickly and less clearly because of these interruptions.”

Unable to join the Royal Marines because of poor eyesight, he found himself taking a job in the City at 18. He soon quit and founded Woodlore, his “bushcraft school” which this year celebrates its 25th anniversary. “I didn’t know anything really,” he says, but he had taught himself enough about lighting fires and edible wild foods to begin passing it on to ordinary people and professionals, including army units.

When he was 12, his father, a printer for the Times, gave him his first 35mm camera. Just as with his bushcraft, he went off on his own and taught himself photography, eventually winning commissions for magazines. “The best photographers are self-taught, I’m convinced of that – they are not full of pretensions,” he says. Apart from David Bailey – “my goodness, he’s fantastic” – his favourites are two National Geographic contributors, Sam Abell and Jim Brandenburg. Abell’s photography “is very quiet”, says Mears. “In the stillness of his images is genius.” Mears, too, seeks out subtle images in quiet moments; photography is something he “absolutely” does for himself, squeezed around the hectic schedule of his TV trips.

Like many autodidacts, Mears expresses his hard-won knowledge in quite a fierce way. Occasionally this can sound like he’s showing off. “I don’t like showing off; I want to teach,” he says. He is also keen to learn. “Sometimes people don’t understand how I can have an expertise in so many different areas. But I do. For example, fungi. I went to Kew Gardens and studied with Dr Derek Reid, who was fantastic. I’ve always sought out the best sources, and if I become interested in a subject I am absolutely focused upon it and I will not leave it alone until I really understand it. I want to understand something to the point of innovation.”

His latest obsession is deer management. Hunting is not always bad “and conservation isn’t always good”, he argues. “For example, nature safaris are not wholly good. There are some places where there are too many tourists observing the wildlife and wildlife has to alter its behaviour, in places where hunters make virtually no detrimental impact and bring money into the economy. Now that’s counterintuitive.” Mears enjoys stalking and killing deer and eating wild venison. Where does he stand on fox hunting? “We have spent a lot of money and effort to preserve an unendangered species at a time when common species of birds were becoming endangered.” He would not hunt the fox but, “that doesn’t mean to say I’m against somebody else hunting it”.

People tend to “think emotionally” about conservation “rather than from a point of real knowledge,” he says. “That’s caring too much. You can love something to death.” And yet there is an important emotional, spiritual dimension to his thinking. Setting aside woodland for preservation is not enough. “You also have to make it possible for people to access it, touch it, feel it, smell it, light a fire, sit around and enjoy it,” he says. “Once you teach people the value of trees and plants around them, they see them as friends, they feel connected to them and they feel responsibility for them and conservation ceases to be a crusade, it becomes a way of life.”

Mears is passionate about environmental education but has not yet been tempted by politics. I mention that David Cameron has been talking to people outside the normal political arena. “I think he’s a good man. I’d like to meet him to gauge that better,” he replies.

Beyond his enthusiastic, knowledgeable TV persona, Mears seems a very private, solitary man. He has no children of his own and two years ago his wife, Rachel, who was 50 and had two grown-up children, died of cancer. They had been together for more than a decade and had only recently married. Her ashes are scattered near a yew tree in Ashdown forest, a short drive from his home. Has he thought about a family of his own again? “My life goes where nature takes it. I’m happy at the moment and life has moved on. It must,” he says. A slight redness appears around his eyes. “She was a tremendous loss but also the journey we made together was fantastic. That’s what you have to remember. There’s nothing else you can say really. I’m not one to cry over spilt milk. That sounds a bit callous … I don’t mean it like that, but you have to pick yourself up and carry on”.