In recent years there have been many examples highlighted in the press, of short term volunteering placements providing little or no support for the projects they claim to be helping. “Voluntourism” is a growing trend, and sadly much of it badly managed. This does not mean however that all short term volunteer placements are bad or ineffective. Below is a very well presented account from one of our volunteers who worked at our project in Villa Maria for 6 weeks. Read on to see how it is possible to make a genuinely positive difference on your gap year.

You can also read this article in the Luton Times here.

It’s six o’clock on a Sunday evening. I’ve been in Peru less than five days. And I’m currently performing as arguably the world’s worst Lady Gaga tribute act for an audience of 300 in one of the main plazas of Villa Maria, a shanty town within the capital city of Lima. I’d signed up for a nine-week volunteering and expedition project with Quest Overseas—six weeks volunteering with children from a number of communities throughout Villa Maria, and three weeks travelling through the south of Peru and into Bolivia.

Quest has been operating in this area for almost 20 years, and from its humble beginnings as a simple summer games programme for local children, it has grown to support a school and housing construction, as well as community outreach.

The gap year volunteers work alongside the local founder, Alejandro—an incredibly passionate man —as well as other local staff to put together a varied programme that includes sports tournaments, fetes, swimming afternoons, and the aforementioned Sunday shows.

It was Alejandro who first convinced me and the other pasty, sceptical volunteers who’d been pressed, still jet-lagged, into the kind of celebrity impersonations that leave children crying at birthday parties that what we were doing was about more than being laughed at as ‘gringos’.

While Villa Maria has developed remarkably since the first volunteers arrived, 20 years ago, the area is still plagued by deprivation. 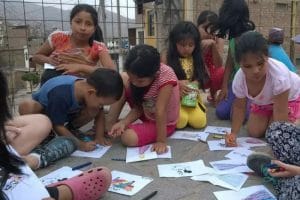 Our performances as celebrities, Marvel and Disney characters, gave the audience the chance to see something spectacular. Alongside the rather more professional efforts of Martha and Lucho, the show’s MCs and choreographers, and dancers culled from the Quest school, the shows are a chance for families who are often separated by long working hours to spend a few hours doing something special together.

Similarly, our time in the communities during the week was about more than just playing with kids. With parents away for most of the day, older siblings—usually no older than 12—are left to look after their young brothers and sisters. We gave them a few hours where they were able to relax from this responsibility, experience something they wouldn’t normally have access to, such as the local swimming pool, and play with other children from different communities. Despite living so close to one another, communities remain isolated.

These divides are where Quest’s operation comes into its own, working with local community leaders like Alejandro and the incomparable Pato, who guides our group from first to last day. They ensure that the volunteers go where we can have the most impact—putting on an outdoor film night for children in a community where none of them have ever been to the cinema, for example, or building a house for the most in need within a neighbourhood.

The experience taught me even a small impact is worth a lot. But would I do it again? Just sign me up!

Click here to learn about the project Ellie was part of.