When we left our Autumn Exped team last they were helping to fight forest fires caused by slash and burn agriculture, in the Bolivian jungle. Unfortunately because of the extremely dry weather they’ve been having, as soon as the sun rose embers would catch and the fires would spread again, undoing the efforts of the volunteers and firefighters from the day before. So our team were kept busy with the destruction of the fires well into the week. Thankfully the fires are now out and fingers are crossed that they will remain that way until wet season!

Due to the unexpected fires the team made the unanimous decision to stay and volunteer a bit longer with the wildlife at the sanctuary! Giving them a full week to care for the rescued wildlife that they were assigned to look after during their remaining stay, which included: howler monkeys, night monkeys, jaguars, ocelots and pumas (as well as many more!). 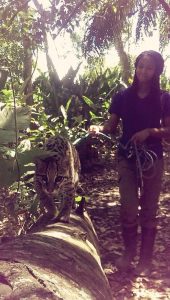 Lauren’s been volunteering with the young ocelot ‘Kevo’, pictured above, walking him on his jungle trails and an older  jaguar Juancho. Juancho is unfortunately blind and can’t be exercised in the jungle like Kevo, instead he resides in a large enclosure, so it’s up to his volunteers like Lauren to ensure he has enrichment. 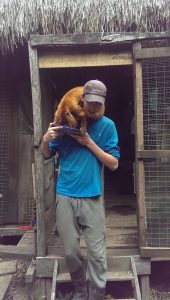 Ed’s been working with Ru the jaguar and male howler monkey, Biton seen here on Ed’s shoulders. Biton came to the sanctuary as a baby and despite hopes for release, unfortunately it doesn’t appear possible at this stage. He doesn’t socialize well with the younger monkeys at the sanctuary and although he recently befriended some wild females, he lost their affection to stronger, wild males. Ed participated in Biton’s personal care and enrichment with another volunteer, who’s currently helping them to develop a new management plan for him. Fingers crossed for Biton! 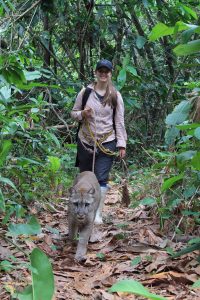 Emily
Emily spent the last week caring for ocelot Vanesso, who was brought to the sanctuary several years ago after being confiscated from a Chinese restaurant where he was kept on display, and the 2 puma sisters, Wara and Yassi, who were brought to the sanctuary as cubs due to illegal wildlife trafficking. All of the cats Emily cared for can be exercised on their jungle trails, experiencing as close to their natural habitat as possible. 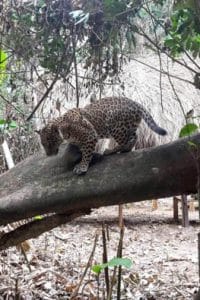 Rosa
Has been caring for the night monkeys, camp animals (including Rhea’s, birds, deer and tapir etc.) and baby jaguar Kusiy, the youngest resident of the wildlife sanctuary. Kusiy has a large enclosure but can’t be exercised like the pumas and ocelots, instead volunteers like Rosa create independent enrichment for him, to develop his skills and keep him from getting bored. 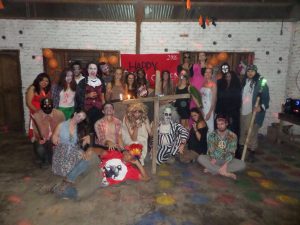 The team have worked incredibly hard the last few weeks so it seemed only fitting to hold a big Halloween themed party to celebrate and say farewell! Gruesome costumes were mandatory!

All the wildlife that resides in the animal sanctuary has been given a second chance that wouldn’t be possible without Communidad Inti Wara Yassi’s (CIWY) and the help of volunteers. Have a look at our Summer Wildlife Conservation Project and our Bolivia Wildlife Gap experience if you’d like to volunteer at the park yourself, or visit CIWY’s Website to find out more about the charity.