Its been a week of Spanish, Sucre, cerveza and salsa (among many other activities!) for our South American Exped as they settle into language lessons and the South American way of life,  big thanks to team member Ed de Winton for sharing his account of the their first week in Bolivia! 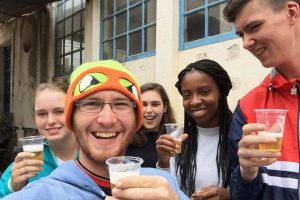 After arrival into Bolivia Matty took us to drop our bags off in the 24 hour luggage drop off point at the airport. This is where I learnt my first thing about Bolivia; 24 hour opening times mean “we’ll definitely be open 9 – 5, however we probably won´t be open at night”. If a taxi driver says “diez minutos”, make yourself comfortable because you may be in the cab for a while. However this is all part of being in South America and it makes it the great continent that it is.

We survived our first encounter with La Paz and made it safely to the beautiful city of Sucre, which may or may not be the capital of Bolivia. Being the only boy in the group my alpha male instincts kicked in, meaning blindly following Matty anywhere and everywhere. Luckily he seemed to know what he was doing and he introduced us to Sucre and gave us lots of little tours. I have now seen everything from the cemetery to the big hill beside the Wally court and all the way down to the other square where
good pizzas live. Thanks to Matty I also know where the super market is and have achieved my first aim of living in South America – “find bacon (Tocino)”. 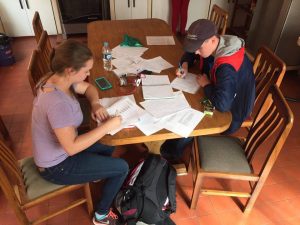 Not knowing any Spanish and proving this by only being able to right my name on the exam before classes I wasn´t too sure what to expect. However my fears were soon put to rest when I was given the lovely Sara as my first Spanish teacher. I can now offer a girl a drink, tell her she is beautiful, count to 35 and do my ABC.

Wally, similar to volley ball played in a squash court and in typical Bolivian style has very little rules. Everyone had very high expectation of me as I am particularly tall, however I was useless and lost twice as many points as I won. Overall it was a very fun session and a good way to break the ice with my fellow quest members and others in the Spanish school. 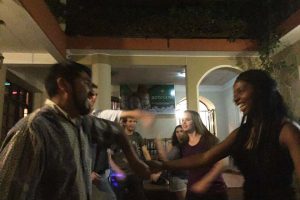 Knowing my dancing skills are not the greatest Matty assured me that you become far better after a few Cervezas (beers). As far as I know I picked up Salsa very quickly and was able to dance with all the girls in professional style, only to be shown up by Roberto who can lead two girls at once. He seems to be good at everything (he is the Wally teacher, Salsa teacher and also turned out to be the cooking teacher).

Cooking was fun however I have never cried so much in one day as me and the other lads were put in charge of chopping onions. Not only this but during my lesson earlier that day Sara had a competition with me and Emily to see who could eat the most amount of chillies and hot sauce. Of course Roberto soon took over and cooked a delicious meal for about 12 people whilst we had table football competitions- overall it was a very nice evening. We then went out after, however thought we shouldn’t go to a club after we had been to the bars as we had to climb a few mountains the next day. So after the bars me and Matty took pleasure in supporting our fellow English landlord in the pub downstairs. 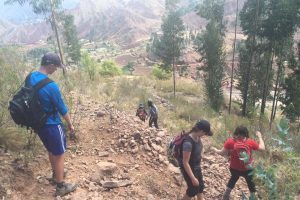 This was my first experience in trekking across mountains and it turns out mountain air is very good for hangover cures. I have never seen views like that before and I will always remember them. We then stayed in a tribal village in the mountains and I got to see extreme lifestyles and incredible people. The next day included showering under a waterfall and going to an incredible crater in the mountains where dinosaurs used to live. In typical Bolivian style no one has been able to properly identify what caused this crater and it could be anything from a drained lake to aliens to tectonic plates.

So far so good, and as I keep being told “this is just the beginning”.