post-title What says Xmas more than a pooing man?! 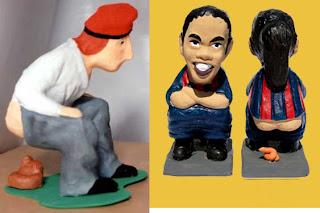 El Caganer, a rather strange figure, has been a characteristic of Nativity scenes all over Catalonia for many years. No self- respecting Catalan Bethlehem scene would be complete without him! Nowadays he comes in many shapes and forms, from monks to shepherds, Barcelona or Madrid football players to famous film stars – all performing the exact same action – defecating. That’s right! They are actually squatting down, with their trousers round their knees, having a bowel movement!
Although an integral and essential part of the Nativity scene, this colourful character is often difficult to spot. He is usually to be found in an ”outlying” area – behind a suitably placed bush, for example – and not actually centre stage with the infant Jesus himself!
Los Caganers first began to make an appearance in Nativity scenes in Catalonia in the late seventeenth century, but didn’t really achieve widespread popularity until the nineteenth century. Nowadays they are as important a character as Mary, Joseph and Baby Jesus himself. Look carefully at any Nativity scene in Catalonia and you will always find him lurking in the background, replete with the traditional red Catalan hat.
So what do they actually stand for? Believe it or not, the widely-accepted answer to that question is really a very simple one. Their ”fertilizer” enriches the earth around them, thus promising a buena cosecha (a good harvest) during the forthcoming year. This translates into a general good omen for the future. Upon purchasing a Caganer, are told that owning him will bring good luck and prosperity. One thing is certain, they do say much about the Catalan sense of humour.