post-title Why I miss Jose Mourinho 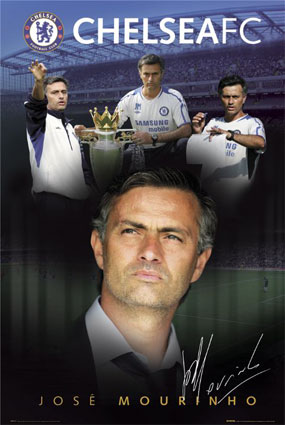 Readying myself for two weeks time when the special one returns to the bridge here is a swift reminder of why he was one of the greatest people ever to grace the English Premiership. So in light of tonight’s first leg away at Inter what better excuse to take a trip down memory lane and roll out some of the outspoken manager’s most notorious quotes?

The one that kicked off the love-hate affair with the British public on his arrival at Chelsea in 2005: “I’m not a defender of old or new football managers. I believe in good ones and bad ones, those that achieve success and those that don’t. Please don’t call me arrogant, but I’m European champion and I think I’m a special one.”

On his new job at Stamford Bridge: “If I wanted to have an easy job…I would have stayed at Porto – beautiful blue chair, the UEFA Champions League trophy, God, and after God, me.”

On his new boss and Chelsea’s billionaire owner: “If Roman Abramovich helped me out in training we would be bottom of the league and if I had to work in his world of big business, we would be bankrupt.”

After losing to Barcelona in the Champions League in 2005: “My history as a manager cannot be compared with Frank Rijkaard’s history. He has zero trophies and I have a lot of them.”

On the strain of chasing for the title in 2006: “For me, pressure is bird flu. I’m feeling a lot of pressure with the problem in Scotland. It’s not fun and I’m more scared of it than football.”

On Arsenal manager Arsene Wenger, a jibe he later apologised for: “I think he is one of these people who is a voyeur. He likes to watch other people. There are some guys who, when they are at home, have a big telescope to see what happens in other families. He speaks, speaks, speaks about Chelsea.”

On Alex Ferguson: “After the game on Wednesday we were together in my office and we spoke and drank wine. Unfortunately it was a very bad bottle of wine and he was complaining, so when we go to Old Trafford for the second leg, on my birthday, I will take a beautiful bottle of Portuguese wine. “

On Pietro Lo Monaco after the Catania president said he wanted to ‘smack (Mourinho) in the mouth’ in 2008: “As for Lo Monaco I do not know who he is. With the name Monaco I have heard of Bayern Monaco (Munich) and the Monaco GP, the Tibetan Monaco (Monk), and the Principality of Monaco. I have never heard of any others.”

And finally, on new Chelsea manager and former AC Milan coach Carlo Ancelotti: “Now they say of him in England that he is Prince Charles. But I only know one Prince Charles, and that is the Prince of Wales. Ancelotti is no friend of mine.”