Many thanks to Quest volunteer superstar Tina for this honest account about her time away with Quest. We love hearing from our volunteers once they make it back home. Great work and beautiful pictures of the animals you cared for.

”To make this journey happen, I persuaded my mother and underwent a complicated visa application process. I tried to learn some spanish and was given various vaccinations before departure. I arrived in La Paz after a horrible 26-hour flight from Beijing. From that moment everything happened was so memorable! 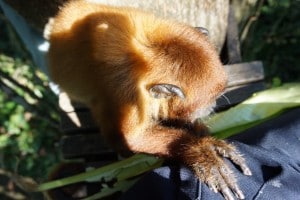 I met the leaders and the rest of Quest team members in La Paz. We walked around the La Paz city before we set out for park Ambue Ari! In the first few weeks we worked for the construction of a cage for a puma called Ru. We carried sand, rocks and cement from the camp to the site of the cage through a swamp. None of us has done any carrying like this before but at the end of our stay we became quite good at it and able to carry significantly more than the beginning. Apart from this, we helped with cleaning of the area surrounding the cage and digging holes for the erection of poles. I remember the time at school I used to spend ages writing essays about work force and labour markets without knowing what it feels like to do physical work. I realised that I was always a consumer and I was glad that at the park I could use my hands to do valuable things!

The swamp is an ephemeral environment. In the first two weeks the water level was to my waist, probably of the highest during our stay, afterwards it became narrower and was covered by algae. I walked along the same path everyday in the five weeks and every time I looked at it was like my first time. I was always amazed by the colour of the fallen leaves and the animals that happened to pass by. ! The closeness with animals and the understanding of animals I developed at the park are very special to me. I grew up in a big city and I never had a pet, which made me a bit afraid of animals. One day people at the park heard of it and they thought it very impressive for me to come to the park and try to overcome my fear, which made me feel that it was not something to be ashamed of. To my surprise I got on quite well with the baby monkeys and the ocelot Lazy cat that I was responsible for. ! In the last three weeks we were assigned different animals and my job was walking and feeding three baby howler monkeys and an ocelot Lazy. We were required to read files about the particular animals and were trained up by other volunteers. I worked alone in the afternoons with lazy cat and I kind of liked it.

Sometimes I sang songs trying to make lazy cat less grumpy and her tail patted the earth along with the rhythm. Everyday after I finished feeding her I used to sat outside her cage for a while, surrounded by mosquitos. I worked with a Colombian vet called Mónica for a while to walk the monkeys. I could only speak basic Spanish and she does not speak much English but the language barriers did not seem to affect our work at all. Once I was sitting on the seat in the tree high above the ground and one of the monkeys pulled off my glasses and dropped it away. My eyesight was pretty bad and I called Mónica’s name but did not know what to say. After a few second she climbed up the ladder, grabbed my shoes and lead me step by step to the ground! 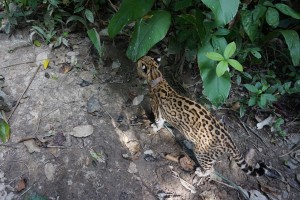 After some time I found out that my fear for animals stem from ignorance. The animals I worked with are entirely rational and they have their own emotions. Signs showed that lazy cat got much more grumpy when I came to her cage late and the night monkey Petey was not unpredictable as I thought and if when he did bite there must be something wrong with our feeding! Apart from the regular jobs, we have weekly tasks of feeding certain animals and daily tasks which varied from preparing for meals to cleaning the toilette.

During our stay all of us had done each of the daily tasks at least once. ! The park is a friendly place. We got a chance to work with people of different backgrounds. The park also organises various events, normally on Fridays and occasionally Tuesdays. We went to parties of different themes, a prom (in which we wore gumboots and second-hand clothes and made cocktails), a trip to a resort place nearby and a quiz night. At the start it was hard for me to imagine a life without internet but it seemed that we adapted to it quite quickly, probably because of the friendship we developed at the park and our busy daily routines. ! There were just too many first times happened at the park and the jungle has constantly been the theme of my dreams in the past few weeks when I came back.”