post-title Carlos and Juan- their story

Carlos and Juan- their story

These puma cub brothers are called Juan and Carlos. They were brought into the care of Comunidad Inti Wara Yassi (CIWY), the leading wildlife conservation group in Bolivia, in 2008.

It cannot be stressed strongly enough how sad this photo is. These babies (3-4 months in the photo above) should be with their mother for at least the first two years of their lives, in order to gain the necessary skills to survive in the wild. The second wild animals are torn away from the wild and their natural life, their chances of survival plumme dramatically.

Thankfully CIWY, a rescued animal rehabilitation and care organisation, were on hand to rear these cub. Sadly, Jaun tragically died 4 months after rescue. The necropsy showed a number of potential reasons as to his sudden decline. The leading theories were that he ate part of Carlos’ collar, leading to a blockage or that he ate something poisonous. Regardless, Carlos was now alone, without his brother.

Fast forward 9 years and Carlos still lives in Ambue Ari, one of the three animal centres in Bolivia. It is impossible to release him back to the wild due to a degenerative bone disorder, almost certainly developed due to the lack of his mother’s milk when a baby.

Carlos is a remarkably well-tempered male adult puma. He is rather small in size but has a huge personality. He loves to walk and explore his trails throughout the animal centre with his international volunteers. He is walked and managed by a lead system. Cats (both big and small!) love routine and we ensure that Carlos has a strict one- this both decreases stress and anxiety for him, and therefore making the entire process as safe as possible for the volunteers. This unique approach to managing big cats has a fantastic safety record, which allows rescued animals to experience the smells, touch and sounds of the jungle- an invaluable form of enrichment.

Many Quest Overseas volunteers have worked with and cared for Carlos. It is a long walk through the jungle to reach his enclosure, however his clear joy at arrival for company makes it a very much worthwhile journey.

While CIWY has made the best of a horrible situation with Carlos, we can never forget the passing of his brother, Juan. The illegal trafficking of wild animals is still huge business- often hunting adults for their pelts and then selling their babies as pets. CIWY work with the local government in the confiscation of animals in transit. Sadly, it is often too late for instant re-release the second they have direct human contact.

The animal sanctuaries run by CIWY house roughly 7 jaguars, 15 pumas, 8 ocelots, 500 spider, capuchin, squirrel and titi monkeys as well as many different tropical birds and reptiles. Quest Overseas has supported CIWY for almost 15 years. Our volunteer Gap and University teams have built a lot of the infrastructure throughout the animal centres, as well as cared for many animals, such as Carlos.

This year CIWY need our help more than ever, a general downturn in Bolivian tourism throughout 2017 has seen independent volunteer numbers decline dramatically, so they are looking forward to receiving our Bolivia Gap and Bolivia Summer teams more than ever. If you know someone who is a genuine animal lover, looking for first-hand experience handling and supporting Amazonian wildlife email matty@questoverseas.com today for more information about how they can #bepartofthechange 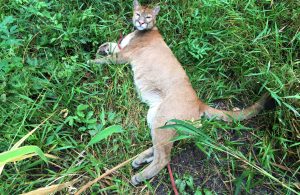